Coronavirus, a whole market of content production and emotional consumption

December 2019, while people around the world were setting their new decade’s resolutions and governments planning how to better serve their countries, a global pandemic was in its way to create tremendous changes at many levels; economic, social, technological and even geopolitical.

These changes impacted mainly the health care systems of all countries, from the most developed economies to the least. Tunisia, as distinguished as it is as a country, took also some measures falling under a wider preventive strategy to combat the pandemic. Aligned with the global measures which were recommended by the World Health Organization; these measures have been mainly communicated via media, namely TV channels across the country. However, the actual spread, discussion and debate around these measures were happening within the Tunisian webosphere, especially on Facebook, the social media network that played an essential role in shaping then driving the Arab Spring revolution, triggered in Tunisia back in 2011. 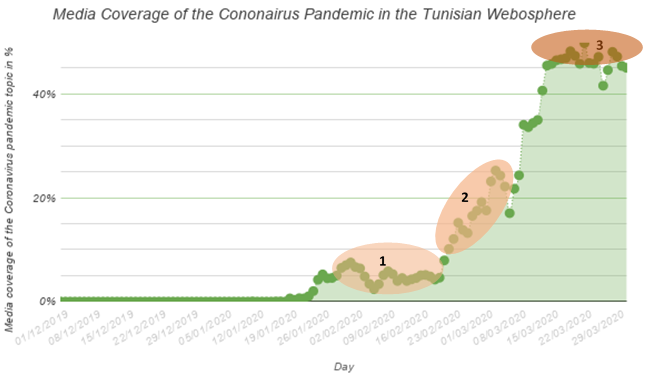 To understand more the three periods and how the content produced along with the sentiment associated to it changed over the course of the four previous months, WebRadar run an in-depth sentiment analysis. In fact, once content is collected (mentions and social reactions about them) a classification by sentiment (positive, neutral and negative) is done. After this classification, a Cognitive Behavioral Therapy based analytical approach is run in order to dive into three main pillars of human psychology, the cognition (thoughts), the feelings (emotion) and the act (behaviors). This approach suggests that the human psychology consists of a circular process that starts by thoughts which generate feelings and end up showing as actions fed by the initial thoughts and charged by the generated feelings.

From January 1st till February 9th:

During this period, content was generated to mainly cover international news. With an average share of content of 3%, the Tunisian webosphere generated content about the situation in China mainly and some other countries, already touched back then by the pandemic such as Iran and some Golf countries. Tunisians consumed this content with a neutral sentiment (46%). Although 17% of content consumers were rather optimistic that the Coronavirus wave would pass, 37% showed concern expressing worry while interacting with this content. 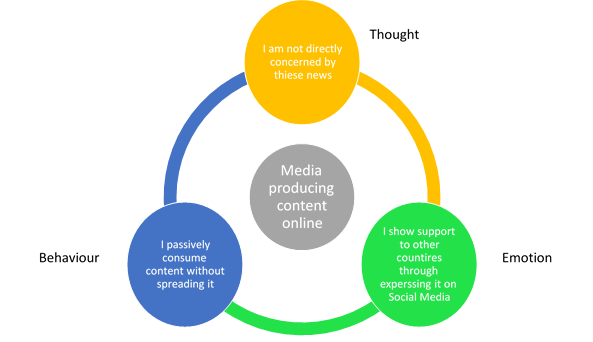 From February 24th till March 9th:

The share of content covering Covid-19 news escalated from an average of 3% to an average of 20% during this period of time. The Tunisian net started mentioning cases in Tunis, predicting the worst scenarios and hypothesizing general lockdown and other normal-life-threatening measures. This period also showed a shift in sentiment of Tunisian content consumers online. In fact, people were expressing more fear, anxiety and confusion via a negative sentiment of 40% against 48% of neutral sentiment and only 12% positive sentiment expressing mainly optimism and faith in science. 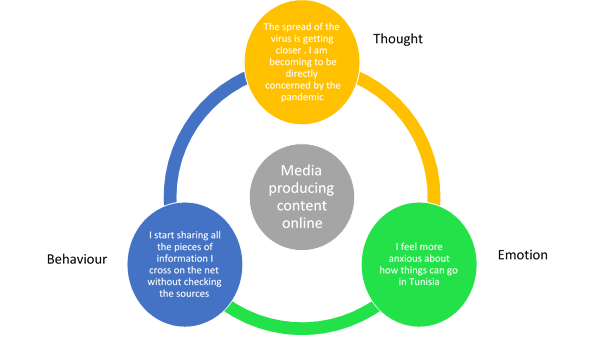 As a couple of events had happened during this period, namely the declaration of the general lockdown by the President Kais Said on March 22nd along with other measures and the declaration of the first death in Tunisia due to Covid-19; the share of content around the pandemic exponentially increased from an average of 20% to an average of 46% during this period. This increase made the Coronavirus pandemic a subject of a national debate, giving it a bit less than half of the overall media coverage online within the Tunisian webosphere along with a dramatic change in terms of sentiment expressed among the online content consumers. In fact, 60% of the sentiment was negative across the net expressing mainly fear and panic against 37% of neutral sentiment and only 3% of faith and optimism. 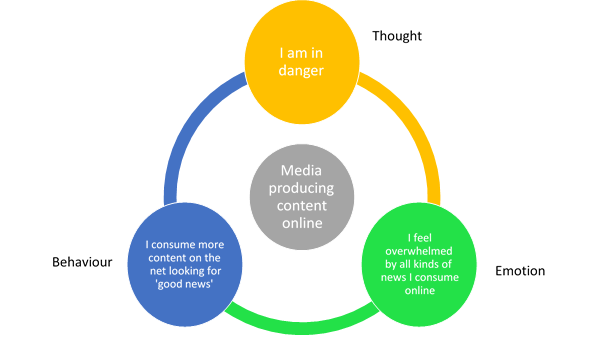 From merely showing empathy and support to other countries to a state of panic, Tunisians online have been impacted by media productions online. Even though it’s called the virtual world, the webosphere shaped several off line behaviors such as impulsive purchasing and non-respect of the lockdown due to the spread of fake news and non-controlled online media production. But to what extent the state of fear and panic, mainly triggered by online media coverage, is contributing the efforts put globally and nationally to combat the Coronavirus pandemic? To be continued …

For daily insights related to the Coronavirus pandemic in Tunisia on the net, stay tuned on our Facebook page.

WebRadar is a Tunisian company, a pioneer in the Arab world in the field of market research and big data. WebRadar is also an analytical tool line and online media saver that allows professionals to monitor their online reputation, competitors and analyze consumer behavior and public opinion. 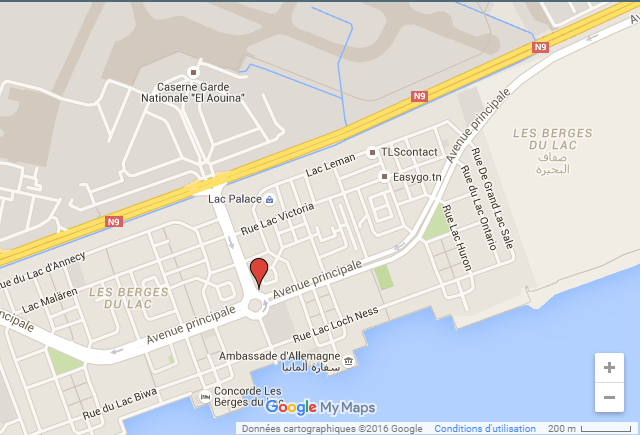